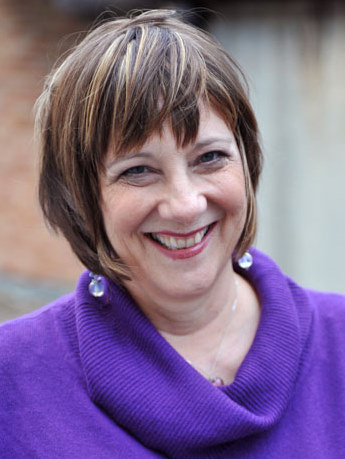 Deborah Crombie was born in Dallas and grew up in Richardson, Texas, a suburb north of Dallas, the second child of Charlie and Mary Darden. Her maternal grandmother, Lillian Dozier, a retired teacher, taught her to read at the tender age of four. After a rather checkered educational career, which included dropping out of high school at sixteen, she graduated from Austin College in Sherman, Texas, with a degree in biology.

She then worked in advertising and newspapers and attended the Rice University Publishing Program. A post-university trip to England, however, cemented a life-long passion for Britain, and she later immigrated to the UK with her first husband, Peter Crombie, a Scot, living first in Edinburgh, Scotland, and then in Chester, England.

After returning to live in Dallas, a trip to Yorkshire inspired her first Detective Superintendent Duncan Kincaid/Sergeant Gemma James novel. A Share in Death [Scribner, 1993], was subsequently given Agatha and Macavity nominations for Best First Novel of 1993. The fifth novel, Dreaming of the Bones (Scribner 1997), a New York Times Notable Book for 1997, was short-listed by Mystery Writers of America for the 1997 Edgar Award for Best Novel, won the Macavity Award for Best Novel, and was voted by the Independent Mystery Booksellers Association as one of the hundred best mysteries of the century. Her subsequent novels have been received with critical acclaim and are widely read internationally, particularly in Germany.

Crombie's novels are published in North America, Japan, Germany, France, Czechoslovakia, Spain, Romania, Greece, Turkey, the United Kingdom, and numerous other countries. The latest novel in the series, A Killing of Innocents, is available in February 2023 from William Morrow.

Although she travels to England several times a year, Crombie lives in McKinney, Texas, a historic town north of Dallas, sharing a circa 1905 Texas Craftsman bungalow with her husband, Rick Wilson, two German shepherds (Dax and Jasmine), and two cats.  She is an aficionado of tea and cocktails, enjoys cooking and admiring her garden, reading, birdwatching, and playing with her dogs.

She is currently working on her twentieth Duncan Kincaid/Gemma James novel.

To Dwell in Darkness

No Mark Upon Her

In a Dark House

Dreaming of the Bones

Deborah Crombie is an American mystery novelist who writes so vividly about England, she might have been born within the sound of Bow Bells. (She) gets better with each book…lyrical, biting and evocative.– Cleveland Plain Dealer

A master of the modern British mystery…one writer who gets better with every book. – Harrisburg Patriot News

An uncanny affinity for the English detective genre…Her characters are three-dimensional and are drawn with compassion and sensitivity. – Dallas Morning News

Crombie has evolved into a masterful novelist. – Denver Post

The Sunken Sailor. Berkley Publishing Group, 2004, by arrangement with Malice Domestic Ltd.
Deborah contributed a chapter for the round robin mystery novel, The Sunken Sailor, for Malice Domestic Ltd. This novel was written by fourteen writers, editors and readers of crime novels who each contributed a chapter, then sent the manuscript on to the next author who picked up the story and sent it on to the next. Fourteen masters of suspense…one unpredictable mystery.

The Sunken Sailor
Between the two world wars, just outside a proper English village, the Dowager Duchess of Faughstrayne is hosting a house party. Her once-magnificent estate, Castle Crawsbey, may be in disrepair, but the chorus-girl-turned-aristocrat can still impress her guests: a London charlady who has a secret past (or does she?); a Russian émigré now impoverished (or is she?); and a wounded vet who can solve crimes (or can he?). Just one rule: Don’t mention the hostess’s dead husband (five years and mum is till the word) or

her missing son (rumored to be in a Patagonian prison), lest you be met with a violet-eyed look that could kill. But what offence did American visitor Admiral Cornelius Brandon commit? A dreadful one, apparently – his body has been discovered at the bottom of the koi pond, tied to a submerged statue of Neptune. And the weekend has only just begun…